What Do You Need to Know?

Coming back after this trip, we will all try to convey to you - collectively and individually - what we witnessed first-hand....and we'll do our best.  But there is so much...We can only pray to do it justice.

To those of you who helped support this trip, we can't thank you enough.  Your prayers and donations now allow us to share the truth that can only come from "seeing it for yourself".   That is invaluable.

So, if you only have a short time to read, what is most important for you to know?

Those seeking legal asylum in the United States are waiting at the border, with nowhere to sleep or eat.  Local Mexican churches and organizations are doing their best to provide housing and meals.  Everyone we met was cold, tired, hungry, and anxious.  Many had nowhere to sleep.  While we were there, the nighttime temperatures dropped into the 30's.  Some days it absolutely poured rain.  We were drenched and cold - and we had a place to stay!  Many people - if not most - needed medical care to treat the illnesses inherent to living on the streets, some of whom had done so for months while they journeyed north.

The majority of the people seeking asylum came as families: parents, grandparents, children, and babies.  They were doing everything in their power to get across the border to safety - legally - through the myriad of hurdles our government has created.  And a good number of these hurdles are illegal and wholly unconstitutional according to our own laws. 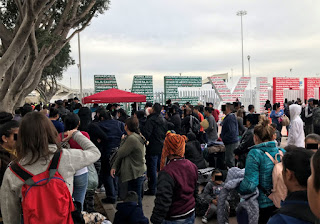 Many of the immigrants we met were from Mexico, El Salvador, and Nicaragua, but there were also large contingencies of asylum seekers that came from Haiti, Cameroon, and Russia.

The treatment that the immigrants receive after their number is called ("Report from El Chaparral" ) can honestly be likened to a form of torture.  It is heartbreaking to watch parents, after finally hearing their number called in the open square, scramble for permanent markers to write their contact information on their children's arms.  They know they will be separated from each other by our system.  They are doing the only thing they can to ensure that they may see their children again.  Who knows it these temporary tattoos will work to do that?

Because those called are only allowed to keep the layer of clothing closest to their skin, volunteers scramble to help them change into warmer clothes at their base before they are loaded unto a bus.  These clothing donations are needed to fend off the frigid boxes they will be "stored" in while they await their interviews to determine if their situation is dire enough to qualify for more hearings within the United States boundaries.  These ice boxes have already been well-documented.

The border wall itself is a conglomerate of corrugated steel, concertina wire, concrete, floodlights, "no man's land" barren zones traveled by armed border patrols, and amalgamations of all of these put together.  Although it may happen, the entire time we were there we never saw anyone attempt to thwart these barriers.  To build a higher wall would be ridiculous, but from all the construction equipment we saw, they are adding to it constantly. 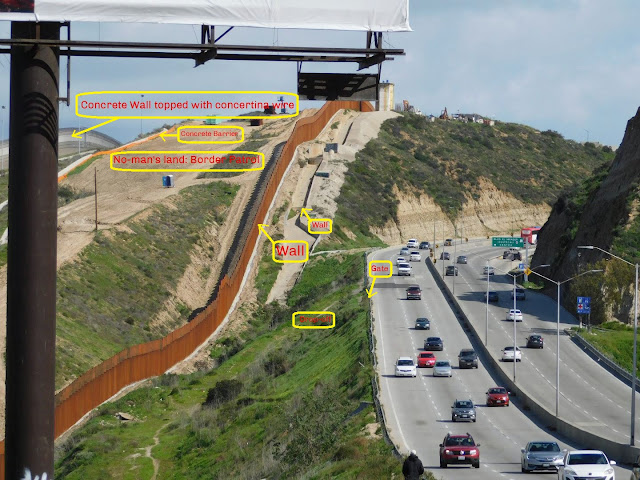 We also saw beauty:  Wonderful people, just like you and me, hoping only for a safe, stable life.  Grateful for the tiniest of kindnesses. Appreciative smiles when
you commented on how beautiful their children were, or helped them with paperwork, or escorted them to the doctor for free medical care.

We partnered with amazing people as well.  Al Otro Lado has created a system of support that allows volunteers to assist for as little as a day and as long as...well... indefinitely.  This network of non-hierarchical volunteers works tirelessly to help those seeking asylum get their most basic needs met, offering medical care, legal consultations, simple meals, and perhaps most importantly, the warmth, dignity and respect that are due all human beings. 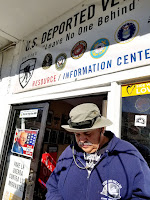 We also partnered with Unified U.S. Deported Veterans and Veterans for Peace: see  "Thank You For Your Service, Now Get Out of My Country".

So what is it most important for you to know?
That there is injustice and cruelty at our doorstep.  That our tax dollars are paying for it.  And there are wonderful people trying to dismantle that cruelty and injustice.  You all helped us be a part of that, and we are most grateful.


But our work here has just begun.
Posted by MaryHanna/MPT at 6:35 PM